Our most important achievements are summarised below.

For extensive information in English about Jacob Cornelisz. and his works, you can visit https://arthistoriesroom.wordpress.com/category/artists-architects/jacob-cornelisz-van-oostsanen/. 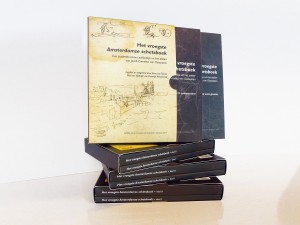 A pocket-size sketchbook from the period 1520-1535 has been preserved from Jacob’s workshop. The Foundation Jacob Cornelisz. van Oostsanen has always dreamed of publishing this extremely rare testimony of early sixteenth-century workshop practice, which is now kept in the Kupferstichkabinett in Berlin. After years of preparation and extensive research of the original sketchbook by art historian Ilona van Tuinen, the moment was finally there in March 2014: the Foundation presented Het vroegste Amsterdamse schetsboek: the first facsimile edition of the entire sketchbook (ca. 15 x 10 cm), accompanied by page-by-page comments and a general introduction. In a separate contribution, Daantje Meuwissen tentatively suggests that the drawings in this booklet were made by Cornelis Anthonisz., Jacob’s grandson who is known to have been working in his grandfather’s workshop and who later became well-known as a cartographer.

The sketchbook displays a high diversity in subject matter: the sketches range from copies after paintings by Jacob and his workshop, to portraits, figure studies, cityscapes, animals, perspective studies, and renaissance ornaments. Apparently the artist always had his booklet ready to hand. It can be seen as a sample of the many kinds of techniques and subjects a young artist had to master before he could start a career of his own. It did not only offer him an overview of his progress and a means to collect motifs he thought worth remembering, but also a rich source of elements that he probably kept using in his later career. 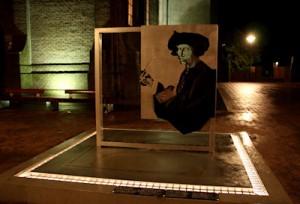 In 2010 a monument for Jacob was revealed in the heart of Oostzaan, right in front of the church. The intriguing design was made at the initiative of the Foundation by architect Eva Stache and executed by Meyn Food Processing Technology, Oostzaan. At every moment of the day, from every angle, the monument offers a different viewing experience – just like Jacob’s multi-layered paintings do. Eva Stache based Jacob’s portrait in the monument on the double portrait that was painted of him and his wife Anna around 1530 by their son Dirck Jacobsz. (now in the Toledo Museum of Art, USA). 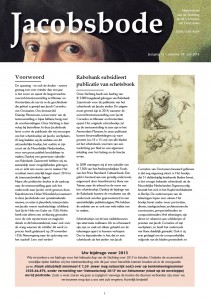 Between 2001 and 2014 the Foundation published the Jacobsbode, a half-yearly newsletter with (academic) articles and the latest news and events regarding Jacob Cornelisz. and his work.

Contents of all Jacobsbodes in Dutch